How I Became a Free Spirited Gypsy

Ever since I can remember I've dreamed of traveling and living by the ocean. I was introduced to traveling during my childhood but only within the USA. My mom's love of the mountains and US western history shaped just about every vacation I ever had growing up. There were some beach vacations here and there but mostly we ventured out West from Memphis,TN each summer and zig zagged our way to my grandma & grandpa’s house. They lived in Colorado when I was very little and moved to California later.

Here's a short list but not even close to everything I did with my mom on vacations. I've been to the Grand Canyon so many times I've literally lost count. I've seen the Grand Teton's mountains in Wyoming probably just as many times as the Grand Canyon. I toured Custard's last stand and stood on the field he died on with so many other men. Multiple times I've visited The Alamo, Yellow Stone National Park, Alcatraz, The Sand Dunes and ghost towns. We took horse back rides and crazy jeep tours into Monument Valley and other crazy off road adventures. I attended chuck wagons and white water rafted more than once on the very frigid Snake River.

I've even seen the much sought after farm called Prairie Dog Town in Kansas with the largest prairie dog in the world. Billboard after billboard for miles and miles repeatedly told us how we needed to stop and see all the farm had to offer, donkeys, snakes, cows, including the amazing 5 legged cow. Of course we stopped, it was all very exciting and a goat kept trying to eat our purses. The largest prairie dog in the world turned out to be a huge concrete statue! And the 5 legged cow, well that was actually real.

I have so many memories from growing up and traveling and eventually I became grateful for my mom dragging me out West every year. We took a few different people along for the ride many times, my great Aunt Marie, a younger family friend & once my 1/2 brother John, literally a brother from another mother.

When John came along our trip was very memorable. I was about 12 or so and terribly awkward, very thin, all legs, bucked teeth and the best flybacks you ever saw. If you don’t know what flybacks are you really missed out in life and well, I’m real sorry I don’t think those are coming back, haha. Think hair parted down the middle, Saturday Night Fever, disco and lots of hairspray, preferably Auqanet. When the wind blew these flybacks on each side of my head would literally fly up as one piece and return again to it’s resting place. If you know anything about flybacks it will impress you that mine touched ever so slightly on the back of my head. One day in my tell all book I’ll have some really sweet pictures to share. I’m thinking of calling it Burnt Toast due to the distracted stories within stories that I often tell. Stay tuned for that nail bitter!

Where was I? That’s right, vacation with John. Of course we stopped at the Grand Canyon and he thought it would be fun to hike down into the canyon for a bit. John was the best big brother any 12 year old could’ve asked for in life. He grew up in St. Louis, MO and I saw him in the summers and sometimes on visits to St. Louis when we were seeing my mom’s crazy but awesome family. He was about 6 or 7 years older than me. He moved in with us after he graduated that summer. I LOVED having him around. I had been a pretty sad and lonely only child. He took me places and introduced me to wrestling (affectionately referred to as “rasslin” in the South). I was hooked and we went to the Memphis Colosseum most Monday nights to watch Jerry Lawler (a Memphis legend), The Hulk, André the Giant, the nasty Iron Skeik and so many other famous 80’s wrestlers. We became closer as the years passed even after he moved back to St. Louis. I’m thankful for the time I got to spend with John, he’ll sadly never know how much he impacted my life. He was another sad soul lost to suicide at just 27 years old.

Hiking down into the canyon was so awesome! I remember all kinds of people and thinking it was so crazy that you could hike to the very bottom of this massive open space. I was inspired and a tiny seed was planted that day in the summer of 1982.

Fast forward to 2015. I decided I wanted to travel once my kids were out of school and backpacking the Grand Canyon was at the top of my list. I’d never even camped out in the wilderness. I was clueless. I figured I should try it out before I went on some crazy backpacking trip.

So I bought a $60 tent, a $20 sleeping bag and asked my adventurous 20 year daughter to join me on this experiment of camping. It rained and thundered and lightening woke me up with a jolt at 2:30 AM. I was scared to death but excited. I can’t explain it but I fell hard for camping that night. I became obsessed. An entire new world opened up to me at the age of 45. My life would never be the same.

Being out in nature has always been my favorite thing to do in the entire world. I love the challenges of camping. Problem solving how to do things outside without modern amenities. I made super cat stoves and joined the The Sierra Club. I took a survivor course and yes I made fire with a flint and some dried brush and twigs. I learned the basics of backpacking with seasoned backpackers. I made new friends for life. 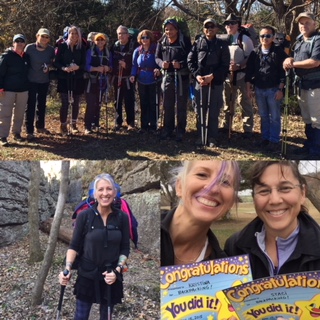 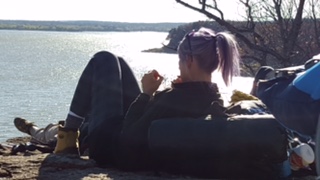 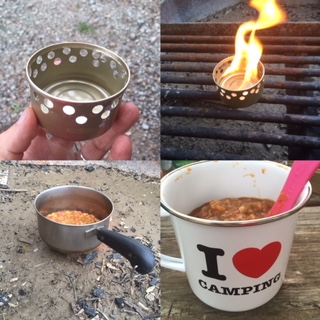 After getting rid of just about everything we owned my daughter and I moved to San Diego with plans to travel 10 months after our arrival, fulfilling my dream of living by the ocean (8 years in the waiting!). San Diego was full of ups and downs and I have to say in the end so much fun. We lived 5 blocks from the beach, I bought a beach cruiser and spent every free moment exploring and hanging out at the beach or the boardwalk. I learned alot on that 1st adventure, everything preparing me for my future travels.

As planned my daughter and I took a 3 week camping adventure out West May of 2017. We camped out every night of the 21 day

trip except 5 nights. We backpacked for 5 days down into the Grand Canyon a week into our travels. It was rated advanced and I chose it because it wasn’t a popular trail. I was excited to carry my own inflatable kayak to the Colorado River (until I actually had it on my back) and paddle across the river. It was the hardest thing I’ve ever done until a vipassana silent retreat the same year but that’s another long story to tell another day.

I haven’t stopped traveling since that trip began last May. Sometimes I’ve returned to Kansas City or San Diego to work and visit. Outside of those work trips to regroup I’ve visited Central America living in Panama for 3 months, Costa Rica and various parts of Mexico spending time in Baja, San José, Valle de Bravo and most recently I lived in Hawaii for 3 months. Each place brought it's own challenges and loads of fun. I'm not rich or independently wealthy. I've worked or traded in several of the places I've visited. I'm what you would call a budget traveler. Traveling this way was the only way I could make my dreams of traveling come true at the moment. Living this way has taught me a lot and made me so grateful. I believe it's the most fun and interesting way to travel so far. I'm just in the beginning of all the great memories I will continue to make.

Today I begin day 6 of camping and living out of a Prius. This car my daughter named Bernadette, is my actual home for now. By no means

am I a pioneer in the world of Prius living. There are others before me that have inspired my latest way to make my travels happen on a shoestring budget. I’m heading to Catalina Island to work for the next month and then San Diego for a couple weeks to work and visit. In August I begin a trip up the West Coast. A dream I’ve had for a few years now. I have no end date. I plan to explore as much as possible, see as many beaches as I can and meet other awesome travelers. I’m going to work on writing my memoirs in between adventures. I’m free to roam this beautiful earth. I’m thankful, happy and VERY excited!

It’s never too late to try something new or to follow your dreams. Life is short and meant to be lived fully. Do whatever lights your heart on fire. Take risks, want/need less, make memories and embrace each day. I have everything I need and own in my little Prius. Life for me is simple these days. I love this life I intentionally created. Do whatever it takes to love your life too. You won’t regret it one minute.

Much peace to you,

If you’re interested in where I’m going and what I’m doing on my travels please subscribe to my blog here.

Add me on Snapchat! Username: https://www.snapchat.com/add/hippiedork

My Pursuit to Happiness